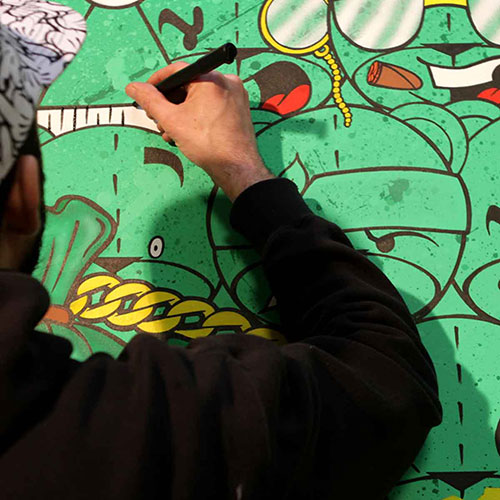 Zach aka Oreo was born October 3rd 1983 in Paris from an American mother, and a French father. Graffiti is part of his life since his early childhood, nonetheless he considers his real implication in the Urban Movement began when he moved Downtown Paris in the late 90’s: walls and metro tunnels of the French capital become his “sprayground”.

As years went by while keeping his passion, Oreo quickly realized that graffiti, especially at that time, was not a career. The hard anti-writers repression of the 2000’s in Paris, will cement that idea, and after a few trips to the US, Oreo decides to customize clothes, his first steps as an entrepreneur took place at the mythical “Puces de Clignancourt” flea market. Over a period of a decade the self-taught artist trained himself to the crafts of graphic designer, screen printer and mastered airbrushing techniques.

He creates his own brand Endzlab in 2009. That’s when his iconic character a mischievous teddy bear, The Badass Bear, was born. It represents a large part of Oreo’s artistic work, whether it is in the streets, on canvases or on his textile creations. Nonetheless, his creative universe isn’t limited to that, he likes to put his spin on brand logos and characters known from everyone. Through this he hopes to wake minds as well as anchor his art in his time. In 2015 Oreo opened his first showroom in Barcelona where you can find all his creations, from: sticker packs, to canvases, to a large selection of limited edition clothing, to unique collectable items. Constantly crafting with an innovator’s mindset, in his lab Oreo cultivates his Independence.